Felicia pasta is ideal for anyone who wants to maintain a healthy and balanced lifestyle without sacrificing taste: brown rice pasta, corn pasta, buckwheat pasta, pasta with lentil flour and pea flour are just some of the many alternatives to pasta made with gluten free flours and suitable for the preparation of light pasta dishes, perfect also as a cold dish. Felicia's range of alternative pastas includes various pasta shapes, both classic and special, from spaghetti to penne, from fusilli to tortiglioni, from farfalle to caserecce and lasagne.

Today, there are many alternatives to pasta : pasta with pulse flour , for example, is very suitable for those seeking an alternative to eating plain pulses. It is rich in vegetable protein and has a lower carbohydrate content than traditional pasta, as shown in the nutritional table for pasta with pea flour.

Choosing the right wholemeal pasta for your diet is important; as Ancel and Margaret Keys, the two scholars who invented and theorised the Mediterranean diet, wrote:

We are all literally on a diet and what you eat is your diet.

According to scientists, it is a common misconception that dieting is an 'unnatural' change in eating habits, subject to limitations in taste and quantity. Indeed, most people who go on a diet believe they do so purely for aesthetic reasons and less to improve their health. This is why Felicia, a brand of Andriani, proposes a new way of eating to safeguard one's wellbeing at 360° by offering quality organic products and a complete range of gluten-free pasta made with naturally gluten-free ingredients such as: brown rice, corn, buckwheat, lentils, peas and others.

Cereal pasta: what are cereals?

According to the official definition of cereals drawn up by the Istituto Superiore di Sanità (Italian Supreme Health Institution):

The term cereal refers to any herbaceous plant belonging to the Gramineae family, which produces starchy, floury, edible seeds - called caryopses but commonly, and incorrectly, referred to as 'seeds or grains' - used for both human and animal consumption and ground into flour

Cereal pasta is a great alternative for cooking tasty recipes that allow you to maintain a healthy, balanced lifestyle without sacrificing taste! Some combinations and seasonings for cereal pasta can enhance the flavour of a recipe, giving an extra touch of taste to your light pasta dishes. The use of cereals in cooking, in the form of pasta, is becoming increasingly popular. As well as being extremely versatile, they have many different benefits and nutritional values compared to traditional pasta. The main cereals used for food production are:

Buckwheat and quinoa also belong to the list of so-called 'pseudocereals' (not belonging to the Gramineae family). According to the nutritional values of cereals, they are an incredible natural source of energy as they are rich in carbohydrates, which are very important for the body as they can be absorbed and reused very easily. Cereal-based foods, the cornerstone of the Mediterranean diet, are also good sources of fibre, have an ideal fat content and are rich in vitamins, especially B-group and E-group vitamins, so they are considered a good source of vitamins and minerals.

Felicia, a brand of Andriani, the only Italian allergen free pasta factory with an integrated Multi-grain Mill, produces different types of cereal pasta:

Pasta with organic and sustainable pulse flour: which one to choose?

Felicia offers different types and shapes of pasta with organic, naturally gluten free and vegan pulse flour: a sound alternative for having pasta for dinner.

Felicia pasta with pulse flour is made from pulses grown mainly in Puglia and Basilicata using sustainable methods. The cultivation of pulses saves more water and reduces CO2 emissions with a lower impact on the climate.

Growing pulses, especially rotating them with other plants such as cereals, helps fertilise the soil, preventing erosion, and helps control pests and diseases, reducing the need to use pesticides.

Here are the various types of pasta with pulse flour available in our online shop:

Pulses are rich in fibre, vegetable protein, mineral salts and are the undisputed protagonists of the Mediterranean diet. Pasta with pulse flour is a great alternative to pasta because it not only keeps you feeling full and retains all the benefits of pulses, but is also versatile and allows a great variety of matches to meet the needs of the whole family.

Pasta with naturally gluten-free Teff flour: the alternative to pasta coming from Ethiopia

Felicia® Teff flour pasta retains the authentic taste of Ethiopian cuisine and is rich in fibre, minerals such as magnesium, phosphorus, manganese, iron and potassium. Teff is derived from Amharic(ti?f) and means lost: the Ethiopians have cultivated Teff, a very ancient cereal characterised by its total absence of gluten, for over 3,000 years. Teff pasta is a naturally gluten-free type of pasta, available in our online shop.

Felicia Teff flour pasta is very versatile for cooking and is perfect for enjoying a first course with the typical Mediterranean flavours: try the penne pasta with Teff flour with cherry tomatoes and capers or prepare a typically summery cold first course with green beans and feta cheese!

Comprehensive list of pulses: what are pulses and what are the most common varieties? 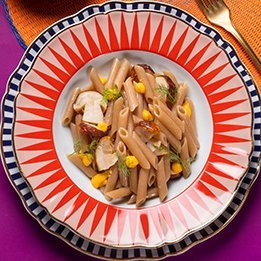